It is a widely known fact that after hiking up half a mountain, there is no better reward than rounding a bend only to be greeted by a misty, magical waterfall that looks like it is right out of a fantasy novel. However, not all waterfalls are found in the places you would expect, like the lush tropical forests of Hawaii.
It is South Carolina's mix of mountains and streams that sets it up to be the waterfall country of the east. If you are looking for some of the state's most scenic waterfalls, then look no further.

Even if you are in Spoonauger for non-hiking activities, you should still take some time to explore the Sumter National Forest. Within is not only a series of trails and forested wonders but the King's Creek Falls, one of many highlights along the Chattooga River.
This 70-foot waterfall sits at the end of a short, but fierce little hike. Ultimately what makes this half-mile hike so difficult isn't because it is a hard trail, but rather it is a lot of stairs, so you can probably skip the Stairmaster for the day afterward!
However, if the burning in your thighs isn't reward enough, this waterfall that tumbles over a tiered rock face that makes it look much taller than it is will be sure to be a satisfactory reward for the work.

Tucked away in the Jones Gap State Park is real postcard material in the form of the Rainbow Falls. This beautiful stream of water drops over 100 feet past a black and tan rock background, living up to its name and painting rainbows in the mist.
While the falls are beautiful, this is another waterfall hike that will require some work on your part. While the roundtrip is only five miles, the Rainbow Falls Trail eventually leaves the spring azaleas behind and climbs just over 1,000 feet in elevation in just over a mile.

Although only 125 feet tall, the Falls Creek Falls are a complex cascade that sends pristine ribbons of water tumbling over the rocky crags on two different levels. It is a surprising transformation considering how peaceful the little mountain brook above that it spawns from is.
This series of water streamers is one of the many highlights of the Mountain Bridge Wilderness Area but is far from its only waterfall.
While the hike is less strenuous than other waterfall hikes around South Carolina's Upcountry, it is a little bit longer as it has you tracing an old logging road for the majority of the way to the falls. However, with rough uphill stints, the hike is not completely without challenge.

While many prefer to see the Laurel Fork Falls make its spectacular 80-foot drop from the same waters of Lake Jocassee that it plummets into.
Boating in the Devil's Fork State Park isn't the only way to get a glimpse at this fantastic waterfall. However, visitors have to be willing to put in the serious legwork in order to see the falls from its other vantage point on the Foothills Trail.
The eight-mile trek takes around six hours to complete and takes true gluttons for punishment over some of the most difficult terrain in the park. However, because the eight miles of hiking is just one way, it will require an overnight stay unless you are an excessively quick hiker.
If you are a true believer that the more pain you endure makes the rewards even sweeter, then the Laurel Fork Falls will be a reward of a lifetime.

Those considering a trip to the Whitewater Falls should be aware that while you can still visit some vistas, the stairs on the Lower Falls, and thus because they lead up to the Upper Falls, are closed after a wildfire that started in late 2016 and burned them out. It might not be until the 2018 season that visitors can go enjoy the whole picture of these magnificent falls again. 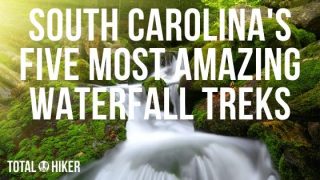 More on Hiking The Carolinas >>