Inside your average Starbucks, America may seem pretty domesticated, but there is still plenty of wild country out there to discover.

However, even the most leisurely hiker knows that after enough well-worn day hikes, the true adventurer begins to crave something a little more… Daring!

So if you are ready to leave those entry-level hikes behind and want something more rugged, enthralling, and just the right amount of danger, these six hikes are sure to get your neurons firing, your legs burning, and your heart pounding in your chest.

So if you are ready for a more extreme hiking experience, let’s begin 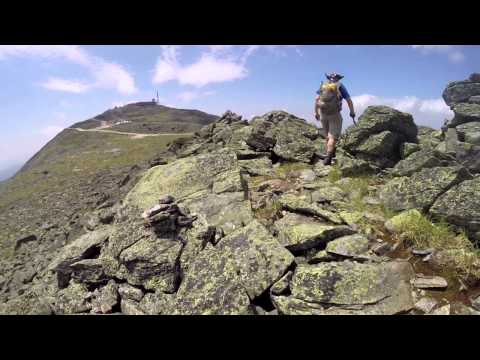 No matter what way you decide to hike up the 6,288-foot Mount Washington, New England’s tallest peak, you’re going to have a devil of a time. However, if you choose the Huntington Ravine Trail, you’re either crazy or really love punishment. Junctioning off the Tuckerman Ravine Trail, the Huntington takes you up, up, and even further up the mountain, but it doesn’t make it easy. With expansive and steep boulder fields, scrambles up exposed granite slabs, and tight squeezes through narrow gullies, this is a hike for those unafraid of obstacles. Oh, and you’re also going to have to deal with the notoriously unpredictable and violent weather of the mountain itself along the way, too.

We’ve covered the Na Pali Coast before, and while it is one of the most dangerous hikes in the country, don’t let that belittle how absolutely rewarding it is. This 22-mile roundtrip tracing Kauai’s rugged Na Pali Coast takes you through pristine Hawaiian jungle, over volcanic rock ridges, and to an endless string of remote beaches. Not only do you have to deal with only semi-dangerous slippery red mud on the trail, but falling rocks can be a worry, as can flash floods, and you definitely don’t ever want to get into the water on the beaches because of the strong currents. There’s a lot of danger along this hike, but that has helped keep it so beautiful and endlessly mysterious.

On paper, the 11-mile hike up a Colorado mountain seems pretty doable, and make no mistake, the summit view at the end of the Barr Trail is a once-in-a-lifetime sight, but this hike isn’t for the weak. On your 7,900-foot ascent up the mountain, you not only have to deal with all the physical hazards that are inherent with hiking up a mountain but because you ascend so many vertical feet, altitude sickness is a risk, if not a certainty if you aren’t used to Colorado’s naturally high altitude already.

To add even more of a challenge, Pike’s Peak is pretty punishing with its weather, particularly during the summer months when most people take the hike and get pounded with vicious lightning storms. However, even outside of the summer storms, heavy hail and the huge temperature drops that spawn them can be a major risk as well.

Do you like mountain climbing, but don’t want to buy mountain climbing gear? Then the Precipice Trail was practically made for you! This short, steep trail that travels up the cliffs of the Champlain Mountain takes a healthy dose of courage (and muscle strength), but it is like a giant rocky jungle gym for adults. You gain 1,000 feet in elevation in less than a mile, but it is not all walking a trail. Sometimes you will be climbing walls on the iron rung ladder pounded into the rocks that don’t always go up so much as they go over, other times you’ll be walking tight rope ledges. However, the climb is both fun and rewards you with impressive views across Frenchman Bay and Mt. Desert Island.

Nothing can induce adrenaline quite like fear and panic, and what is more panic-inducing than realizing you might be lost inside a maze in the desert with your hydration pack running low? If you are unfamiliar with Canyonlands National Park, its name is pretty spot on. There are a lot of canyons in these lands, and none more spectacular than in the area of the park labeled “The Maze.” It is like an alien landscape of red rock twisted into a series of tight canyons that can easily leave the unprepared hopelessly lost.

With no food or water offered in the park and a ranger’s station hours away by four-wheel drive, The Maze is the definition of remote. Once you head into The Maze, be prepared for constant dead ends, sound-muffling walls, and complete seclusion. However, also be ready for the high risk of flash floods, falling rocks, and the constant threat of the park’s extreme heat.

The Emery Creek Trail sounds innocent enough. I mean, it’s a nice creek trail in which you cross over the eponymous Emery Creek multiple times in order to lead you to impressive views of five stunning, but secluded waterfalls. It sounds nice, even pretty fun. Unfortunately, crossing the lively Emery Creek doesn’t mean just getting your feet a little wet. Be prepared to cross waist-deep water with your gear over your head at least half a dozen times. With slippery rocks and high current, this isn’t the pleasant day hike it sounds like. However, there is no better way to beat the Georgia heat.

Some Ideas For Amazing Hiking in Texas