Total Hiker > Hiking Info > Hiking Safety > Bears > What Should You Do If You See a Bear While Hiking or Camping ?

With summer fast approaching, millions of Americans are preparing and packing their gear for outdoor adventures of epic proportions. But here is something you might not be ready for: what to do if you see a bear while hiking! 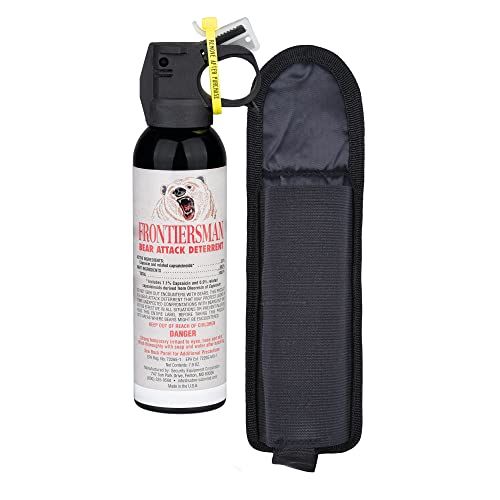 Even though you’re more likely to die from a bee sting than being killed by a bear in Yellowstone, there’s still a chance that you might encounter, so here’s what to do if you run into Yogi in the wild!

In this guide we will look at what to do if you come face to face with a black bear or a grizzly, and the best way to defend yourself should the worst happen.

We will also look at bear sprays and guns and which is the most effective should you find yourself in the worst-case scenario (although you may have already guessed!)

Avoiding an encounter is your safest bet

Bear encounters might make you want to freak out and panic, but the best thing you can do is to stay as calm as possible because freaking out might just make things worse. Aside from staying calm, there are a few other things you need to do (and some you shouldn’t) to ensure neither you or the bear get injured!

The best way to deal with a bear encounter (or heaven forbid an attack) is to never have one. Bears love thick brushes, berry patches, and parsnip thickets, so those are some obvious spots you don’t want to venture into.

But just like humans, bears occasionally use hiking trails too, and startling a bear on your path isn’t the best scenario. You need to stay as alert as possible and pay attention to every sound and movement around you.

You also want to hike in groups, because sadly, hiking El Solo Lobo just endangers you. If you have to go at it alone, make sure you regularly clap your hands and make enough noise to let others (ahem…bears) know you’re around.

If you’ve avoided blind corners and loud streams where bears might not be able to hear you and you still run into one…here’s what to do next.

What to do if you encounter a bear

The US National Park Service advises hikers and campers that encounter bears to stay still and wave their arms above their heads. Keep your voice calm and low-toned and never try to intimidate the bear.

How To Avoid Bears and Other Safety Tips for Hikers

Even though your gut might be telling you to run for your life, it’s actually the worst thing you can do if you see a bear while hiking. Why? Because the bear’s predatory instinct will kick in and he’ll chase you.

Bears typically “bluff charge” before deciding whether or not to actually attack. The bear might lift its head in an attempt to appear larger and might even bound towards you with its front paws but will stop or veer off to the side before attacking.

Again, running away might cause the bear to attack, so the best thing to do is to just stand your ground, wave your arms, and try to convince the bear that you are not a threat. If the bear stops or retreats, step away slowly, never turning your back on the animal, until you’re a safe distance away.

Bears can also charge aggressively, but this generally only happens when the bear feels stressed or like it needs to attack to protect itself or its young. Signs that a bear is about to attack aggressively include displaying a wide-open mouth or snapping of the teeth.

The bear might also have its head and ears pointed down during an aggressive attack. If you’ve got bear spray on you, this would be a good time to reach for it. If the bear seems aggressive, you need to know which kind of bear you’re dealing with so you know what to do next since grizzlies and black bears respond differently to human behavior.

What to do if you see a black bear

Black bears have much larger ears than grizzly bears and do not have the same hump at the base of their necks that grizzly bears have. If you’re dealing with a black bear, fighting back might be your best option.

In general, black bears are more chilled out and less likely to charge aggressively, but if they do, chances are, they’re charging with the intention to hurt you. Black bears will only attack if they’re feeling cornered or particularly ticked off, and if this happens, you need to fight back with all your might, aiming for the eyes and nose.

How to Hang a Bear Bag

Even though you’ll need to fight back, you also need to make sure that the bear has an escape route because cornering it might just make things worse. Grab any tools you have on hand and aim for direct blows to the bear’s face until it gives up.

What to do if you see a grizzly bear

If you’re being attacked by a grizzly bear, playing dead might just help you get out of the ordeal in one piece. Grizzly bears typically only attack when their space, food, or cubs are in need of protection, and fighting back will only worsen an attack.

By playing dead, you’re leading the bear to believe that you’re no longer a viable threat. But playing dead isn’t as easy as just dropping to the ground. You need to wait until the bear has touched you because bears are smart enough to spot fakers that randomly collapse without even being touched.

When playing dead, fall onto your stomach and cover your head with your arms. You also want to keep your legs spread wide apart so that it’s harder for the bear to move you. There’s a good chance that the grizzly will try to flip you over and play with your body.

If this happens, just go with it (remember that dead bodies don’t resist) and roll all the way over so you end up face-down again.

Bear spray is the most effective deterrent out there, and yes, it’s much more effective than a gun. The non-lethal spray has a 25 ft range and 20 ft spread and was designed to stop aggressive behavior in bears.

Obviously, bear spray isn’t a substitute for common-sense like traveling in groups and avoiding dense bushes and berry patches, but you need to have it ON you all the time, not ticked into your pack.

It also goes without saying that you should test it out at home so you know how to use it when the need arises. The last thing you want to do is fumble around in a life-or-death situation.

A bullet very small and you’re more likely to miss or injure instead of stopping a 500lb animal charging you at 30 mph if you’re using a gun. The US Fish and Wildlife Service says that 50% of people defending themselves with guns in bear territory end up with serious injuries. The number of injuries incurred by those that use bear spray isn’t even comparable to the stats on guns.

How to Store Food When Camping in Bear Country

Bear spray works better in an attack situation because of its ease of use. Aiming isn’t as critical as it is with a gun and you also don’t need to hit a vital spot (skull or spinal cord) to stop the bear.

You’re also not hurting the bear with spray, you’re just disabling its breathing and sense of smell. If you’ve ever been hit with pepper spray, you’ll know just how quickly it can change your behavior, and the same happens to bears when you use bear spray.

Most human-bear encounters are relatively benign and bear sightings are awesome experiences for most hikers. However, if things go south, the best thing you can do when you see a bear while hiking (and it’s a little too close for comfort) is to stay as calm as possible.

Identifying yourself as a human and standing your ground is absolutely essential if you want to diffuse the situation. If you’re dealing with a ticked off grizzly bear, there’s no use fighting, and playing dead is your best bet of making it out alive in the event of an attack. If it’s a black bear you’re facing, you’ll have to fight with everything you’ve got.

Carrying bear spray is one of your best weapons for both kinds of bears though and it’s also much more effective at repelling bears and disabling (instead of hurting) them when the need calls for it!