If you’ve never heard of it before, you might be wondering what bear bagging is, especially if you have taken up hiking and camping recently when people have moved to canisters instead.

Hanging a bear bag is a really useful skill for camping and hiking, even when we’re not traveling in bear country as it allows you to keep your food out of the way of plenty of other critters too.

In essence, bear bagging is a technique that suspends a bag of food in the air with the aim of protecting your food stash from bears, rodents, and other food-stealing critters. Sounds simple right?

If you’re an old-school outdoor enthusiast, you might be pretty well clued up on how to hang a bear bag. But don’t be fooled if you see an experienced hand do it. Perfecting the art takes skill and practice.

There’s a lot more to hanging a bear bag than just tying a bag of food to a tree. Some national parks advise against the use of bear bags because if it’s not done properly, you’ll just be making it that much easier for bears to add exotic items to their regular dinner menu. 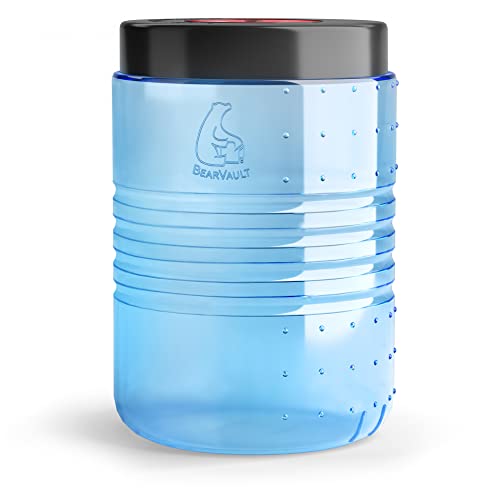 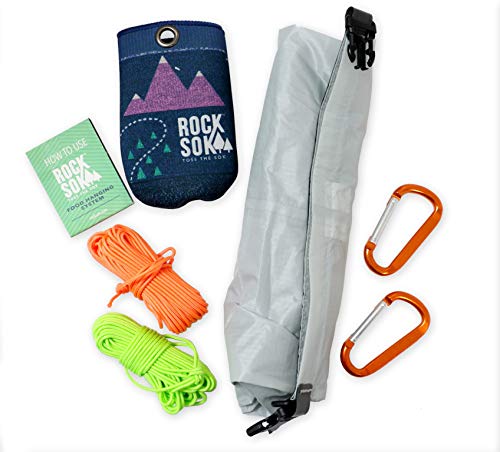 How to hang your anti-bear food bag – three options

Regardless of which method of bear bagging you choose to use, the first and most important thing to do is finding a tree 100 feet from your campsite. If you’re camping in grizzly country, aim for 300 feet.

Pick a branch that’s no more than 4 inches in diameter as you don’t want to pick a limb that’ll be able to support a bear’s bodyweight.

The branch also needs to be at least 18 feet off the ground as the bag will hang below the tree and those bears are pretty darn tall!

Please note, this isn’t a spectator sport, so make sure there are no other members of your hiking party near you when you throw the rock sack as flying rocks can really hurt

Once you’ve tossed the rock sack over the branch, remove it from the cord and attach the cord to a carabiner on your food bag.

How to Store Food When Camping in Bear Country

Next, hoist your food bag up ensuring it’s at least 6 feet from the tree’s trunk. Ideally, it should hang 6 feet below the branch and 12 feet off the ground.

Once it’s positioned correctly, the last thing you need to do is to tie the other end of the cord to a suitable anchor, which can be another tree or a big rock.

For this method, use a rock sack to secure your cord over a branch in a tree, similar to the traditional method. Using the PCT method, you’ll pass one end of the rope (which was attached to the throw bag) through a carabiner and lock it before pulling the bag as high as you can.

Locking the carabiner is critical because it prevents the rope from getting jammed in the carabiner. If the rope gets jammed, you won’t be able to bring your bag back down again.

Once your bag is suspended, attach a stick or stake to the rope and use it as a jam stick. Hold the rope that’s suspending the food bag and tie a clove hitch around the stick on the side of the rope you’re holding. Place it as high up on the rope as possible. Next, slowly release the cord until the stick jams into the carabiner.

This method is probably the most effective because you literally have to pull the rope to lower the food bag. To get his paws on your stash, a bear would have to climb the tree and cut the rope from the branch.

If you’re an old-school camper, you might be pretty well clued up on how to hang a bear bag. The key to the efficacy of this method, however, lies in doing it correctly. Use the wrong kind of carabiner or hang the bag too low and you might be left without food for the rest of your trip and potentially condemn a bear to be shot.

It’s not always possible to find an ideal branch to hang your bear bag from, in which case you’ll have to use the two tree method. This method will see you using two shorter branches from two different trees.

What Should You Do If You See a Bear While Hiking or Camping ?

The best bear bags are made of lightweight materials that are durable and sport attachment points for hanging.

Here’s what else to look out for if you’re planning on adding a bear bag to your kit:

Most bear bags are constructed with materials like Kevlar, which is bear-proof. These materials are tear-resistant and rugged, making them the best pick for protecting your food from bears. Even though most bear bags are water-resistant, you might need to seal the seams to prevent leaks.

The size you choose for your bear bag really depends on how much stuff you’ll need to store. In general, bear bags range between 10L and 20L capacity and can store 5-10 days’ worth of food for one person.

The best bear bags have clips, loops or strings to which you can attach a carabiner. If the bag doesn’t have an attachment point, you can always use a lark’s head knot to hang your bag, but it’s just much easier to use a bag with an attachment point.

Even though it’s often overlooked in bear bags, try to choose a waterproof bag so your food doesn’t get soggy during a storm.

Some bags feature trash compactor bags or liners that prevent moisture from getting into food, but each extra feature adds weight to your pack. A feature that is pretty essential is odor-proofing, which seals in smells so bears can’t sniff out your food.

Bear bag or canister – which one is best?

Bears are getting really good at raiding food bags, which is why many national parks now require campers to use bear canisters instead of bear bags.

You can even get fined or kicked out of some parks like Yellowstone if your bear canister doesn’t meet the regulations.

As you have probably guessed by now, it isn’t as easy as it seems to hang a bear bag.

First, you’ll have to find the right tree. Then you have to throw a rope at least 12 feet up in the air, which can be a real pain when other branches are obstructing your path. And lastly, a lot of folks just can’t hang a bear bag correctly, which kind of defies the purpose.

How To Avoid Bears and Other Safety Tips for Hikers

But you also have to consider the fact that bear canisters are bulky and hard to fit in your pack. They also weigh more than 2lbs, but if carrying a little extra weight around isn’t a big deal, it’s definitely a much more convenient option.

The truth is that your best bet is to just use a canister instead of a bag, especially if you’re not experienced with hanging a bag and you prefer convenience and ease of use.

Use bear canisters if:

Use a bear bag if:

We hope that this post has left you feeling informed and empowered on the topic of how to hang a bear bag. If you prefer bear bagging instead of using a canister and you’re not heading into a park that requires the use of bear canisters, you can use the traditional, PCT or two-tree method for hanging your bag.

Hanging a bear bag isn’t for everyone. It’s a skill that’s developed over time and something that takes a lot of practice to perfect. If you’re planning a trip to bear country and suspect that trees might not be guaranteed, it’s safer and easier to just use a canister instead of a bag.